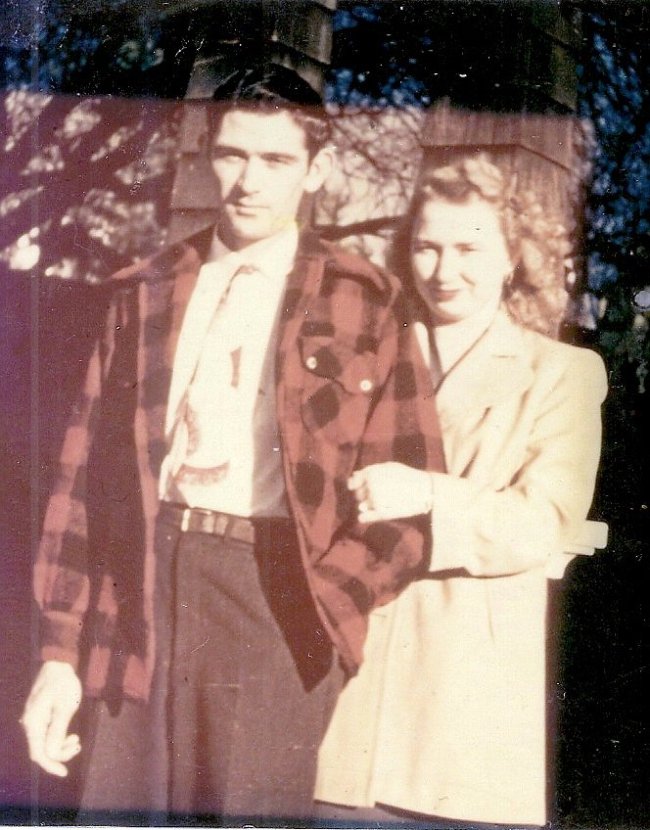 Hubert Lindsey was born in Kelsey, Texas on September 23, 1912. His father and mother were, Billy and Mattie Lindsey (William Jasper Lindsey and Martha Emma Christina Lucinda Mull). He was the youngest of Grandpa and Grandma Lindsey’s sixteen children. The Lindsey children that were closest to him in age were Uncle Raymond, Aunt Mamie and Uncle Parley. He barely survived an infancy bout with pneumonia. Thanks to a devoted Mother, adoring siblings, a Gilmer doctor that made several carriage trips to the Lindsey home, and the faith of the Kelsey Latter-Day Saint community, he survived that near-death experience to live over 59 years. Hubert grew up in his family home in Kelsey and spent many hard days of both work and play with brothers, sisters, nephews and nieces…most of which remained his best friends throughout his life. During World War II, our Dad moved to California, taking his family (our Mother and adopted brother, David Michael) with him. For the next several years, he worked for the Army Corp of Engineers building defensive gun and anti-aircraft artillery bunkers up and down the coast of Northern California. By the time the couple began having children of their own (Steven, John, Marilyn, Harry and Paul Jeffrey (“P.J.” after Uncle Pleasant James who died a short time before Jeffrey was born), Hubert was working long, hard and hot days in the Bacon-American Brass and Iron Foundry, near the family’s California home in Oakland. When Bacon-American moved to Indiana (and Dad could persuade NONE of us to move to either Indiana or Kentucky), he went to work at the Mare Island Naval Shipyard, where he served many years, with distinction and gratitude from the U.S. Navy, having earned a federal “top secret” security clearance. Our father contributed significant “practical” and “common sense” information to Navy investigative review boards and helped determine the reasons that caused the sinking of the Polaris-class, nuclear submarine, U.S.S. Thresher. He died, tragically, in an automobile accident after spending Thanksgiving with some of the Miller and Arrington (his wife’s) family, in 1971.

The pain, horror and tragedy is hard enough to imagine…but trying to relate to those circumstances, and their effect upon the soul, mind and heart of a 16-year old girl that had happily fallen in love and just lived through a whirlwind courtship…can only leave one heart-broken when you consider the magnitude of the painful torture rendered by the hot and consuming mangler ironer…AND the subsequent amputation and loss of her right hand.
She, aside from being gravely injured and falling into a horrible shock, fell into a deep grief and depression for months following the accident. Her faithful and devoted companion, frequent care-taker, constant suitor and, sometimes, nursemaid following the horrible accident…was her new beau, immediate fiancé (because he proposed marriage immediately after, promising he’d take care of her for life) and future husband and father of her six children…our Dad, Hubert Lindsey.
Hubert and LaVerne were later married, at Pittsburg (Cass County), Texas on June 6, 1936. They were later sealed together as husband and wife in the Oakland Temple of the Church of Jesus Christ of Latter-Day Saints, on February 6, 1965. All of their children were sealed to them in the same Temple; the five youngest, later that day…with David Michael sealed to them in 1988 (following both Hubert’s and David Michael’s premature deaths).

The author of this story is Steven Edward Lindsey, the oldest child BORN to the union of Hubert Hefley Lindsey and Dorothy LaVerne Miller. I am writing this account from my new home in Granada, Nicaragua. I do not have access to my “Lindsey books” or my “Book of Remembrance”, as I have not moved them here yet. The dates of my parents’ meeting, courtship and the tragic work-accident suffered by our Mother are approximate…but based on my best recollection. I apologize to Aunts Sadie and Blanche, including their families, if I am incorrect or “vague” about their involvement. It has been a long time since I heard the story from my Aunt Myrtle Hamberlin (although, I heard it several times). I never brought this subject up with my Mother, unless SHE instigated the conversation, because it was a painful experience for her, emotionally AND physically, ALL of her ensuing life. I remember hearing Elder LaGrande Richards (when he served as an Apostle of the Church of Jesus Christ of Latter Day Saints) presenting a sermon on the glories of the Resurrection at a stake conference at the Inter-State Center on the grounds of the Oakland Temple, sometime in the early 60’s. My Mother leaned over to me and told me that she was anxious and excited to experience the resurrection…because her body would be made perfect and she would have her hand restored. All six of my Mother’s children are left handed (even though some of us may be right-hand dominant). Our family doctors (Drs. Chester Green and Riley Green) in Oakland, California; both surmised that we LEARNED to be left-handed because our Mom could not teach us any early tasks…such as eating, coloring, writing, using scissor, et cetera…with her missing right hand. When together, we sometimes chuckle (with fond reflection and memory) of all the things we did that mimicked her behaviors…like using a wax paper or tin foil box to hold a hand of cards to play Hearts or Canasta. Of course, we could hold our “card hand” with one of our hands and play our cards with the other hand. Instead, we all insisted that we use boxes of waxed paper or aluminum foil to insert our cards in upright and face toward us…just as she would HAVE to do when she played. We grew up just believing that was the way we were supposed to do it…along with a number of our cousins that lived close by to our home. This account is told to the best of my memory and recollection. I’m sorry I didn’t’ record this story, and so many others, closer to the proximity of the events or the original telling of these stories by my parents, aunts and uncles. Families are forever.